The Minister of Innovation, Science and Industry has issued an order, under recently enacted federal legislation, extending several time periods for the national security review (NSR) process under the Investment Canada Act (ICA). The NSR process may be invoked in respect of any acquisition of, or investment in, a Canadian business by a non-Canadian, as well as any establishment of a new Canadian business by a non-Canadian. This process can result in, among other things, a prohibition on completing an investment, a requirement to divest the investment, or the imposition of other conditions.

However, in each case, the order does not extend any time period beyond December 31, 2020.

Under the ICA, a non-Canadian’s acquisition of control of a Canadian business is subject to either a pre-closing “net benefit” review (if certain financial thresholds are exceeded) or a mandatory notification (which may be filed either before closing or up to 30 days after closing). In addition to the net benefit review process, the ICA provides for a separate NSR process that may apply to any investment (even a minority investment) or the establishment of a new business in Canada when such transaction or new business may be “injurious to national security.”

Although the concept of “national security” is not defined in the ICA, government guidelines list factors that may be taken into account when assessing whether a NSR is likely to be triggered (such as whether the investment is likely to enable espionage or affect national defence capabilities, critical infrastructure or delivery of critical goods and services to Canadians). As reflected in an April 2020 government policy statement, the COVID-19 pandemic has led to a focus on foreign investments in businesses related to public health and possibly Canadian economic security, including acquisitions by foreign state-owned or -influenced entities (SOEs). (For more details on the enhanced scrutiny of foreign investment during COVID-19, see Davies’ bulletin.) Such increased focus on foreign investment review is consistent with recent developments in the United States and Europe.

For an acquisition of control of a Canadian business, the Minister may now send a notice of a potential NSR up to 60 days after the date on which he receives a complete notification or, in the case of a transaction that exceeds the relevant financial thresholds for pre-closing review, an application for a net benefit review. Furthermore, the Minister now has 90 days after sending that notice to consider whether to recommend that the Cabinet order a full NSR.

Parties to an investment that is not subject to mandatory notification or review may voluntarily disclose it to the Minister. The ministerial order, which was issued on July 31, 2020, provides that the Minister now has up to 180 days after closing to notify a foreign investor that an NSR may be required for such an investment.

If the Cabinet orders a full NSR, the timelines for completing that NSR remain unaffected by the ministerial order and a full NSR can take an additional 110 days to complete (or longer if the non-Canadian investor agrees to extensions).

The government has posted a timeline, recreated below, illustrating how the temporary extensions fit into the NSR process. 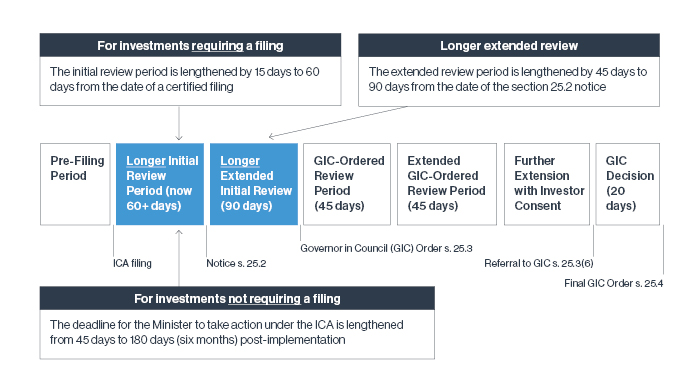 Application to Investments Completed Before July 31, 2020

While the enabling legislation allows for retroactive extensions of time periods with effect from as early as March 13, 2020, and the Minister may make further orders until September 30, 2020, government commentary on this order takes the position that the extended timelines do not apply to investments for which the Minister has received a complete notification or an application for a net benefit review prior to July 31, 2020.

The government’s position is less clear on the application of the extended timelines to pre-July 31, 2020 investments that do not require an ICA notification. It remains to be seen whether the Minister will take the view that any non-notifiable investments completed prior to the date of the order are nonetheless subject to the extended 180-day period for the Minister to consider initiating the NSR process.

Since the COVID-19 pandemic began, the Minister has been applying the ICA’s NSR provisions more broadly than has traditionally been the case. For example, in early May 2020 the Minister issued a notice of a potential NSR of a proposed merger of two gold mining companies that were both publicly traded on a Canadian stock exchange but had mines only in Africa. Although the Minister subsequently determined not to recommend a full NSR to the Cabinet, the initial notice delayed the transaction’s closing until after that subsequent determination.

Particularly in light of the temporarily extended NSR time periods and the government’s recently broadened approach to NSRs, foreign investors will need to carefully consider whether a proposed investment could be viewed as raising potential national security issues. Federal government authorities responsible for NSRs may be inclined to defer analyses of, or decisions on, proposed transactions that are viewed as less pressing than other competing priorities in the COVID-19 environment. Indeed, explanatory notes accompanying the ministerial order state that the NSR process has been made more challenging due to operational restrictions as a result of COVID-19, for both the government and investing parties.

Accordingly, in allocating risk and negotiating termination rights, for example, parties to proposed transactions within the scope of the NSR provisions should consider, among other things, the potential for (i) longer delays to closing proposed transactions if the Minister considers that an NSR might be warranted, (ii) longer periods of post-closing uncertainty of a potential NSR when an applicable time period for commencing an NSR process has not expired before closing, and (iii) remedies that the government could seek if an NSR is ordered.

The Minister encourages early engagement by parties to proposed foreign investments in Canadian businesses. The ICA does not provide a formal or binding pre-closing NSR clearance process for minority investments that do not result in an acquisition of control, and, for investments currently under contemplation, the order would now permit the Minister to initiate an NSR of such an investment any time until at least December 31, 2020. However, it is our experience that meaningful guidance can, in some cases, be obtained through informal consultations with the government.

In any event, the extended NSR time periods increase the need for foreign investors considering any investment into Canada during the COVID-19 pandemic (and until the Canadian economy has recovered) to assess, at an early stage, how the government’s increased scrutiny of foreign investments may affect their proposed investments, and engage with the government as appropriate.